Paul McCartney and Nancy Shevell got engaged in May — and they appear to be wasting no time in making it official! It looks like the couple will become man and wife this weekend. 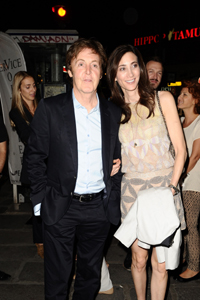 Paul McCartney is planning a big celebration at his home – -and many are speculating that this celebration is actually his wedding to Nancy Shevell!

The Beatles icon’s London home has been a bustle of activity as a party tent has been put up and a van from a decoration company has been spotted at his home. Deliveries of pale yellow roses and clothes for the wedding party were also dropped off at his home.

The couple is reportedly planning their wedding ceremony at London’s Old Marylebone Town Hall, which happens to be the same venue that McCartney married his first wife, Linda.

“It’s such an iconic building, and part of that is the knowledge that Paul McCartney chose to marry [first wife, Linda Eastman, in 1969] here, and to think that he’s doing it again is just incredible,” said Superintendent Registrar Alison Cathcart. “We have been called the Rock-and-Roll Venue, and that’s a legacy of the Beatles because also Ringo Starr got married here. People like Liam Gallagher chose to get married here because of the Beatles connection … a lot of people do.”

The venue contains four rooms which can hold between 20 and 100 guests. “There are no firm details yet on which room they will use,” she says.

The Daily Mail is reporting that McCartney will wed on Sunday afternoon, surrounded by 30 of his close friends and family. This will be the third marriage for McCartney, who divorced Heather Mills in 2008.