Demi Lovato is excited to see her Lovatics on the road during her just-announced fall tour. Is she hitting a city near you? 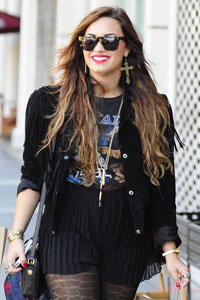 Get ready, Demi Lovato fans! The Skyscraper singer is hitting the road in November for two weeks of concerts to promote her new album.

“This is it!!! Hope to see everyone soon on tour!!!” Lovato tweeted, along with a link to Ticketmaster. The recovering singer performed two concerts in New York City last month that sold out within minutes.

The singer and actress went through life’s extreme highs and lows this year — she went to rehab to deal with her depression, cutting issues and bulimia. Now, she’s on the road to recovery and her star is shining as brightly as ever.

“This is an ongoing process, and the hardest part about these diseases is that they’re things that I’m going to have to face every day for the rest of my life,” the Unbroken singer said of her healing process.

“I’m going to mess up, and I’m not going to be perfect. But as long as I try every day to get better and better myself, then I’m one step ahead of where I was before,” she added.

Will you see Demi Lovato in concert next month?