Anderson Cooper showed off his snake to the captivated audience on today’s episode of Anderson, his new daytime talk show. Our thoughts? We’re surprised that it’s so small! 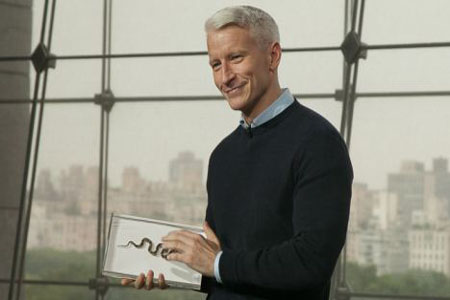 “I know, it’s a little creepy, it’s becoming a little Silence of the Lambs,” Cooper said of his childhood pet snake. The newsman said his producers insisted he bring in the snake after he mentioned it in a meeting.

“I was heartbroken when Sam finally died and I was so upset that my dad came up with a plan to encase Sam in Lucite so that I would always have Sam,” Cooper said of his dad, Wyatt Cooper. The elder Cooper — also a journalist — passed away during heart surgery when Cooper was 10, so it’s likely a memory he keeps in honor of his father.

Today’s show focused on everything pets and featured plenty of dogs — including Cooper’s own Welsh springer spaniel Molly — and a sloth.

The lighthearted episode comes as the show faces low ratings and increasing scrutiny after a stunt left a teenage boy in a coma.

“As part of our routine process, we ask guests for video footage and photos. We did not provide the family with a camera,” Cooper and the show said in a statement earlier this week. “On the morning that they were supposed to travel to N.Y.C., we learned that the teen had been injured. We are very concerned about him and are thinking of him and his family at this time.”

“I was very saddened to hear the news of this accident and want to express my deepest concerns for the teenager who was injured. I take this situation seriously, and my thoughts and prayers for his health, well-being and recovery are with him and his family,” Cooper said.

What do you think of Anderson Cooper’s snake?

Read on for more Anderson Cooper