We know George Clooney is a huge practical joker, but his Ides of March co-star Ryan Gosling reveals more about his multi-tasking co-star. 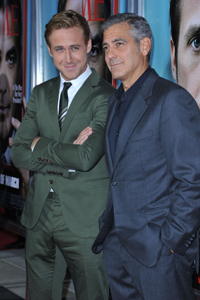 George Clooney wrote, directed and starred in his upcoming movie The Ides of March – and still managed to fit in some practical jokes and charity projects.

What does Clooney like to do in his free time, when he’s not writing, acting or courting beautiful women? Skinny dip! “[Skinny dipping] is a tradition at my house!” he recently said. “It’s funny. Some people skinny dip, but I always go upstairs and put a suit on and then I jump in the lake.”

Gosling, who stars with Clooney in The Ides of March, said the movie is about politics, but not a political film.

“I think the thing that’s important to know is that you don’t need to know anything about politics in order to enjoy it,” Gosling said. “It’s not a political film, it’s just set in a political arena but more than anything… George has been calling it a morality tale and I guess he would know.”