Kelly Ripa has jumped from her morning television gig alongside Regis Philbin over to TLC’s Say Yes to the Dress! How will she fare as a bridal consultant? 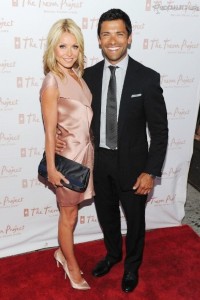 Is that Kelly Ripa on Say Yes to the Dress? You’d better believe it! The Live with Regis and Kelly host has temporarily taken on the role of bidal dress consultant.

A preview for Kelly Ripa’s Say Yes to the Dress episode reveals that what the pint-sized host and actress lacks in wedding dress expertise she makes up for in enthusiasm. Watch the clip below!

Working with a budget of $10,000 (an “incredible” amount according to Ripa) a bride-to-be named Kimora requests something both glamorous and “very dramatic.”

“I’m so nervous because it’s this young woman’s big day, and this really matters,” Kelly Ripa confesses to the cameras. The mother of three (son Michael Joseph is 14, daughter Lola Grace is 10 and son Joaquin Antonio is now 8-years-old) eloped with Mark Consuelos in 1996, after meeting on the set of All My Children.

Task one for Ripa? Lacing up a dress for the blushing bride-to-be, properly surprised to have a famous dress consultant assisting her. “I’m terrified!” says Kelly Ripa, “I really don’t know what I’m doing.” She then proceeds to fumble with the dress lacing until an experienced consultant steps in, pointing out the obvious — Kelly is trying to put the waist of the dress around the bride’s chest!

Amazed at the sheer weight of the wedding dresses, and baffled by comments from the client’s friends, the 41-year-old talk show host says, “This could be the hardest job on the planet.”

How do you think Kelly Ripa did while visiting Say Yes to the Dress?