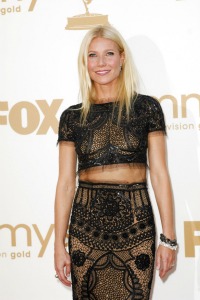 Actress Gwyneth Paltrow rocked the radio-friendly version of Forget You on Glee, but she wasn’t so clean-cut when she serenaded a very important member of Britain’s royal family.

Paltrow was performing at a party at the exclusive Mayfair Club in London, where she and husband Chris Martin of Coldplay are members — as well as Prince Philip.

The Queen’s hubby was in attendance Wednesday night for the off-color performance — even staying longer so he could enjoy the show!

Paltrow at least had the decency to apologize in advance, saying to the Duke of Edinburgh, “I hope you don’t mind the lyrics – don’t tell the Queen!”

She then broke into the completely unedited version of the song, F-bombs and all.

Far from being offended, 90-year-old Prince Philip — who is well-known for his often off-color sense of humor — extended his visit.

“The Duke had been due to leave at around 10pm but he was enjoying himself so much that he stayed for an extra half hour to listen to all of Gwyneth’s songs,” a source told the Daily Telegraph.

“The Duke had a real twinkle in his eye and was having such a good time that after he made his speech he stayed on for a concert downstairs for an hour or so.”

These sort of shenanigans would never fly with the Queen — but Prince Harry would have loved it.

Gwyneth Paltrow was a 9/11 lifesaver