Milla Jovovich has a message for impatient fans of the Resident Evil franchise: “Give me a break!” 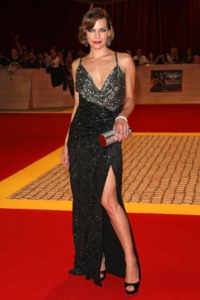 Milla Jovovich and husband Paul W.S. Anderson would love to tell loyal fans all about the script for Resident Evil 5, but as we know they can’t just give it all away!

Fans wondering how Michelle Rodriguez (who plays Rain) and Colin Salmon (One), seemingly already extinguished in the Resident Evil franchise, will be worked into the script are promised they won’t be disappointed.

“I’m just forgetful. I forgot I’d already cast them in the movie,” Paul W.S. Anderson joked of the dead characters at the The Three Musketeers junket this past weekend. “I can’t tell you exactly how it works, but it is really cool I think, and it’s going to surprise a lot of people.”

Milla Jovovich is making an appeal to fans not to cast judgement on Resident Evil 5 (aka “Retribution”) too early. She tells MTV, “People on Twitter are like, ‘What’s going on? Everyone was dead and now they’re coming back! What’s the story?’ You guys, give me a break – I can’t literally give you a breakdown of the script!” the 35-year-old actress said. “The script is so good. People are gonna be like ‘what!'”

“The energy is so high,” Milla Jovovich continued. “Everyone is having so much fun. Between stunt rehearsals and costume fittings and gun shooting… people are just so psyched to be back, shooting this movie. It’s always a lot of fun. We really love what we do. It’s absolutely wonderful and I can’t wait until [the fans] see it. We haven’t even shot anything but I’m telling you, you see some of Paul’s animatrix videos and storyboards, and it’s like, oh my god… how are we going to pull this off?”

In the sci-fi world is it fair game for characters to be resurrected? Or do real-world rules still apply to the dead?

Are you planning to see Milla Jovovich fight on in Resident Evil 5?