Prince Harry has arrived in California for Apache helicopter training. 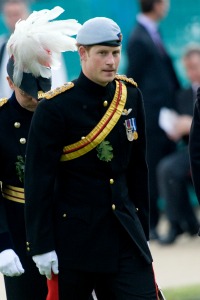 Break out the binoculars, Harry Hunters: You favorite ginger prince has landed in the USA!

The brother-in-law to the ever-so-perfect Kate Middleton is right this very second at the Naval Air Facility in El Centro, California — the very same place where much of the movie Top Gun was filmed.

Captain Wales, as he is known in the British Army Air Corps, will not be getting the royal treatment like his brother Prince William did when he and his lovely new bride hit LA.

“We will treat him as we do all our visiting personnel. We are going to do operations as normal,” said El Centro commanding officer Captain Devon Jones.

“We welcome all our UK counterparts, he is part of the British contingent. The base facilities are open to him as any other.”

“He (Harry)is treated exactly the same as any other,” confirmed exercise director Lt. Col. Peter Bullen. “He would not want to be treated any differently.”

After Prince Harry is done in California he will continue his training in Gila Bend, Arizona for a total of about two months in America. But will the party-loving prince have any time to play?

“It is an intensive training exercise with limited downtime,” said a spokesman for the British Ministry of Defense. “Whatever spare time Captain Wales will be afforded with his fellow colleagues, he will spend privately. He is travelling to the United States in a military capacity and will not be undertaking any Royal or public engagements.”

Las Vegas is a popular destination on weekends. Just a thought.