Simon Cowell is not looking for the next Carrie Underwood or Kelly Clarkson on the X Factor – he wants someone more like Snooki. Guidettes around the world, rejoice! 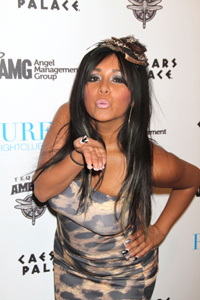 Snooki may not be able sing or dance, but she’s got something that Simon Cowell hopes to find on the X Factor. In fact, that is why the former American Idol judge had auditions for his new show in New Jersey.

“She recently came in to meet some people from my company. I would say they were more star struck by Snooki than anyone they’ve ever met in their lives,” Cowell tells MTV News. “I mean, they were genuinely thrilled. They were taking pictures with her. Yeah, so that was the reason why I came to New Jersey. I wanted to find the next Snooki.”

MTV’s Jersey Shore has made huge stars out of the tanned and fist-pumping crew. “I thought it was genius, absolute genius,” Cowell said. “And whether you like the show or not, these kids are suddenly big, big stars. They just make me laugh.”

Snooki is also “smushing” on Cowell’s show, as she recently tweeted, “X factor! So amazing.”