Hank Williams Jr. will be replaced by former player Barry Sanders this Monday. 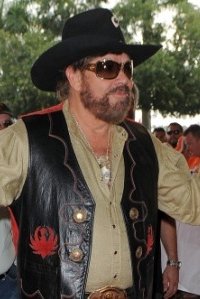 Are you ready for Monday Night Football without Hank Williams, Jr.?

ESPN is and they’re locked in on Williams, Jr.’s replacement — at least for this Monday’s game. It’s Detroit Lions retired running back Barry Sanders. He’ll narrate a pre-game segment on the broadcast where Williams Jr.’s song had been played since 1989.

“Ok, I admit it,” tweeted Sanders on Thursday. “I will be at MNF this week and doing the intro.”

It’s fitting as the game is hosted by the Lions this week.

“The football-themed tease open that we have been using to start the MNF telecast will now air before kickoff,” said ESPN spokesman Josh Krulewitz to SheKnows.com in an email. “This week we have a terrific open narrated by Barry Sanders.”

“This is the format we’ll likely use the remainder of the season. We haven’t made any decisions beyond that.”

As for Williams Jr., the furor over his dismissal is growing. Former vice-presidential candidate Sarah Palin weighed in on the Williams Jr. controversy on Sean Hannity’s radio show on Thursday.

“I think it’s pretty disgusting,” Palin said. “Hank Williams and what he is going through now, I think it’s a very clear illustration of a greater societal problem and that is the hypocrisy on the left — the liberals who can throw these stones at a conservative and they [sic] knowing that they’re not going to be held accountable.”

Williams, Jr.’s intro song, “All My Rowdy Friends are Coming Over Tonight,” was pulled by ESPN from the Monday Night broadcast after Williams, Jr. compared President Obama to Adolf Hitler in an interview. Williams, Jr. subsequently apologized, but it wasn’t good enough to have his song reinstated.