The first trailer for the horror-thriller The Raven has debuted online. The film stars John Cusack as the Gothic writer Edgar Allan Poe, who’s being tormented by a killer and deranged fan. 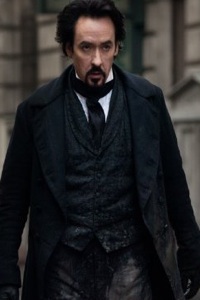 John Cusack is taking a dark turn in his latest film The Raven. Directed by James McTeigue (V for Vendetta), The Raven follows the famous author Edgar Allan Poe (Cusack), as he’s pulled into the murderous game of a serial killer. Luke Evans (The Three Musketeers) co-stars as Detective Emmett Fields, a lawman that tries to stop the killer in his tracks.

British actress Alice Eve also appears in The Raven as Emily, Poe’s love interest and a potential murder victim. As time progresses, the killer gets more extravagant and more aggressive with his tactics. This eventually makes Poe’s real life almost as crazy as the fiction he’s created.

The title The Raven, is taken from one of Edgar Allan Poe’s most famous works. It’s a poem that centers on a man who’s depressed and distraught over the loss of his lover. In the middle of the night, he’s visited by a raven that pushes him further into madness by consistently repeating the word “Nevermore.” It’s been parodied in films, books, and on television including a special “Treehouse of Horror” episode of The Simpsons.

Judging from the trailer, Poe may also lose the love of his life. Emily appears to be in serious danger towards the end of the video. Whoever the killer is has a beef with the author and wants him to suffer in the worst possible way. With the suspense, gore and intrigue, The Raven sounds like a perfect Halloween film, but it doesn’t open in theaters until early next year.

The Raven opens nationwide on March 9.