While The Talk host Sharon Osbourne led viewers to believe she wanted some extended time off to be with rock and roll husband Ozzy, in fact, there were underlying reasons she didn’t reveal, some with potentially deadly side effects. 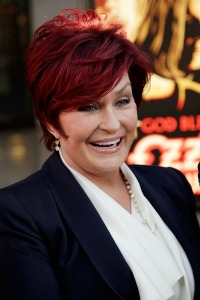 It was a scary turn of events for The Talk co-host Sharon Osbourne when she realized one of her breast implants was leaking.

Several months ago, Osbourne told viewers of her show that she wanted to take a break to be with her husband, rock star Ozzy Osbourne.

Read what she said then about her time off here>>

She recently revealed to everyone the real reason she took a deserved hiatus.

“One morning I woke up and one of my boobies was kind of much larger than the other. So I’m thinking, ‘this isn’t right.'”

Sharon rushed to her surgeon who gave her the life-threatening news that one of her implants had, according to Osbourne, “leaked into the wall of my stomach.”

She since had them removed and has returned to her natural cup size.

Never one to mince words, Osbourne then stated, “I don’t feel like I have a water bed laying on my chest anymore.”

The 58 year-old Osbourne has never been shy about talking about her repeated plastic surgery operations. She’s had gastric bypass, a facelift, a brow lift and breast implants, as well as Botox.

The wife and manager of Ozzy Osbourne also had liposuction and body contouring operations to remove some sagging skin. She stated, “After losing half my body weight, I had flesh hanging everywhere. So much needed to be done that I couldn’t have been done in one operation.”

But Osbourne soon realized she had taken things a bit too far in her quest for perfection.

“I got to the point where I realized I was abusing. I wasn’t respecting my body. I was chopping it, and it’s like, hey, you’ve only got one body and you have to respect your body.”