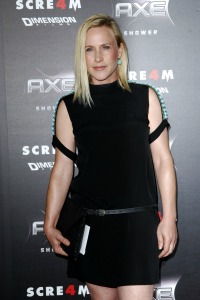 She may have played a psychic on TV, but former Medium actress Patricia Arquette had no idea what she was getting herself into when she joined Facebook.

Something bad happened — bad enough that Arquette is totally quitting the social media site altogether. While she has not disclosed the details, she did send one final message to fans that gives a hint that someone took major advantage of her good graces.

“Okay sweet people—This will be my last facebook post,” the Emmy winner wrote in her final post. “After my usual not checking email and cell messages for 10 days my security guys chewed me out and let me know why I had to end my ‘social experiment.'”

“The experiment was, Could a celebrity actually friend strangers and get to know them as a person?” she asked. “Just a regular person? Could you really become friends? Could you move past all that they had in their mind about you and actually show them the real you? Could you get to know the real them a little? I would say on a large part yes. A beautiful and sweet yes… However, apparently [in] 10 days or so that all changed.

“Now for the IMPORTANT PART-I ASK YOU NOT TO FRIEND ANYONE HERE THAT YOU DON’T PERSONALLY KNOW!!! THIS IS IMPORTANT!!!” Arquette yelled in all caps. “JUST BECAUSE THEY WERE ON THIS PAGE DOESN’T REALLY MEAN THEY ARE SAFE!!!! I’M GOING TO SAY IT AGAIN BECAUSE IT IS IMPORTANT_ IT DOESN’T MEAN THEY ARE SAFE.”

Where is that dislike button?

Patricia Arquette says that despite her negative Facebook experience, she will be keeping her Twitter page. Meanwhile, she can keep herself busy watching her brother David Arquette kick butt on Dancing with the Stars.