It was an episode where GTR rules. Who’s the Rat on this week’s episode of Jersey Shore? Mike called out Snooki on their hook up once and for all and one castmate’s actions continue to haunt them.

Mike “The Situation” Sorrentino just couldn’t seem to keep his mouth shut on last night’s Jersey Shore, and it continued to get him into all sorts of trouble with his roomates. As if a fight with Ronnie, a fight with a wall and a round one knock down with Snooki wasn’t enough, he still didn’t learn his lesson and continued to stir the pot, this time involving Sammi, Ronnie and everyone else in the house. 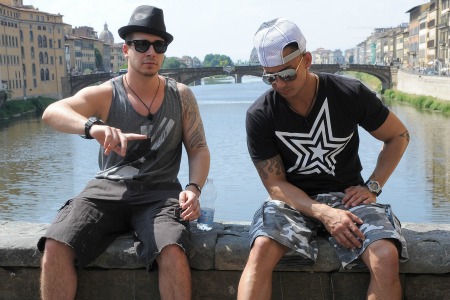 Meanwhile Vinny was blissfully happy to be taking a trip to his mother’s homeland of Sicily to meet his Italian relatives with his boys. He arrived at his mother’s home, a farm, and could hardly contain his excitement.

Said Vinny in an interview segment, “I’m so excited to meet my family. This is what life’s all about, tracing your roots and going to the homeland.”

Ronnie on the other hand wasn’t so impressed, “Four guidos in the woods,” he said when he saw the farm. Mike was more thrilled that he felt like he was on the set of The Godfather 2.

Upon arriving, they met Guadagnino family member after family member and were treated to a home cooked feast. Vinny took a lot of photos to show everyone back home in Staten Island and for the most part, it was a great day for the guys.

The girls decided that they were going to take a wine tour in Tuscany. Which would have been a good idea if it wasn’t just an excuse to get sloppy drunk and confrontational. Snooki and Jenni had words, which angered Snooki because Jenni is her best friend. Jenni kept trying to make Snooki understand that her hookup with Vinny did matter in her relationship with Jionni, because she was deceitful to him. Snooki didn’t see it that way. By the end of the tour, Snooki was miserable and falling asleep on the wine barrels.

But the real story of the night was Mike, who still wants everyone to know he wasn’t lying about his hookup with Snooki. She denied it ever happened, but Mike said he had proof. His friend The Unit was with Snooki’s friend Ryder at the same time Mike was with Snooki, and he said he would have Unit call Jionni and tell him the truth. Snooki flipped out, and began throwing everything she could at Mike, whom Pauly said was, “dodging things like The Matrix.” Mike planted the seeds of his plan with the roomates, to see who would tell Snooki what he was up to first. The first to bite was Sammi, who ran to Snooki as soon as she heard him, thus the lingo of the night GTR.

The episode ended with Snooki trying to find out what really happened with Vinny the night they hooked up and her calling Jionni to tell him the truth.