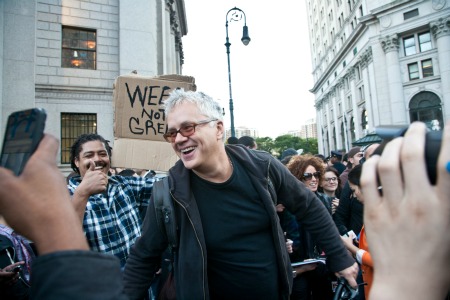 The Green Lantern actor says that while the protest could be a lot more organized, their hearts are in the right place.

“This is what an actual grassroots movement looks like,” Robbins said when he dropped by OWS on Thursday afternoon. “It’s a bit sloppy and disorganized but full of passion.”

“I came down here to educate myself,” Sarandon told CNBC.com. “There’s a huge void between the rich and the poor in this country.”

Tim Robbins and Susan Sarandon are both extremely passionate activists for political liberalism and human rights and actively protested the war in Iraq — a stance that cost Robbins a 15th anniversary celebration of his classic film Bull Durham at the National Baseball Hall of Fame. Dale Petroskey, the Hall of Fame president who just happened to sit on George W. Bush’s White House staff, accused Robbins of helping to “undermine the U.S. position, which could put our troops in even more danger.”

Tim Robbins and Susan Sarandon split in 2009 after 23 years and two kids together. Neither has ever discussed the breakup in detail other than Sarandon vaguely referring to “growing apart.” Sarandon was tied to a professional ping pong player, but Robbins’ love life has been decidedly more hush-hush — no one knows who, if anyone, he is currently dating.