The people behind Heroes, Terra Nova and New Girl are bringing Kiefer Sutherland back to TV, along with Danny Glover and Gugu Mbatha-Raw. SheKnows has the emotional extended preview of their new Fox series Touch and one thing is clear: Single dad Martin and his son may end up saving a few lives or the world, but this ain’t no Jack Bauer… and that could be a good thing.

Kiefer Sutherland returns to TV this spring as Martin Bohm, a dedicated father who refuses to give up on his son in Fox’s Spring 2012 series, Touch. Taking care of mute, disconnected 11-year-old Jake (David Mazouz) has become his life and social worker (Gugu Mbatha-Raw) doesn’t think it’s working, but then Professor Arthur Dewitt (Danny Glover) reveals there’s much more to Jake than meets the eye. SheKnows has the new extended trailer that explains it all. 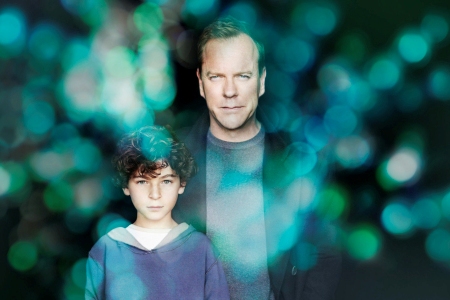 The hot new teaser from Fox starts with a voiceover from Jake, but in the new series the unique child has never actually communicated with the outside world and can’t tolerate being touched. After multiple failed attempts at keeping Jake in school and from climbing a cell tower, social worker Clea Hopkins becomes involved. Believing single widower Martin is in over his head, she decides it’s time to intervene.

Luckily, Martin figures out that his son is in fact communicating, just not the way the rest of us do it: He’s using numbers. With child expert Arthur’s help, Martin comes to realize his brilliant child is able to see things that no one else can, including the patterns that connect seemingly unrelated events.

Once Martin finds a way to communicate with Jake, it becomes his responsibility to decipher his son’s messages and deliver them to the people whose lives they affect, be they a tormented former firefighter, an Iraqi teenager desperate to help his family, a gifted singer at a karaoke bar or a British businessman who lost his cell phone.

Sound confusing? The preview explains it all.

Kiefer Sutherland gets candid about 24, jail and Mirrors