Kristin Cavallari says her lack of a sad story caused her elimination on Dancing with the Stars. 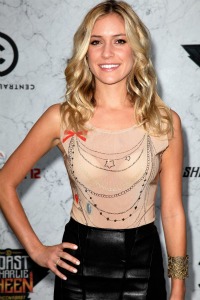 Kristin Cavalari’s shocking elimination from Dancing with the Stars was a huge surprise to fans of the show — the girl can boogie, after all. So what does the reality star think caused her downfall?

Easy: Her much too happy life.

Cavallari was eliminated in a week where dancers were tasked with choreographing a performance that acted out a memorable year in their lives. The other contestants all drew inspiration from hard times — but Cavallari said she hasn’t really had any hard times. Except for that one thing she forgot about.

“Maybe I didn’t have a good enough story. It’s hard to compete with some of the most memorable years,” Cavallari said during an appearance alongside her Dancing partner Mark Ballas on Jimmy Kimmel Live.

“Mine was [just] like, ‘I graduated high school and moved to LA!'” she joked.

“Last night, you each had to dance to a song you picked from a memorable year of your life. [J.R. Martinez], he picked the year 2003, when he was severely injured by a landmine in Iraq. Rob Kardashian — 2003, the year his father died. Chynna Phillips — 1990, the year she quit abusing drugs. Nancy Grace — 2007, the year her twins were born prematurely and spent time in the ICU. David Arquette — 2010, his marriage fell apart and he started drinking heavily. Ricki Lake — 2010, got divorced and her house burned down,” Kimmel said.

“Your year was 2005 and it was most memorable because you had to choose between going to college and being on a reality show.”

“Looking back, maybe I should have done something a little bit sad,” Cavallari admitted.

“It wasn’t a sob story, but obviously I should have gone with the other one,” said Cavallari, referring to her breakup with ex-fiancé Jay Cutler (the couple appears to be back on, by the way).