George Clooney brought an unexpected date to the premiere of his movie The Ides of March. 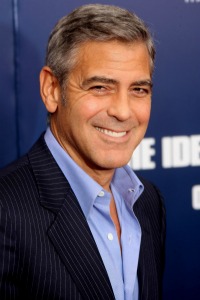 George Clooney is the most sought-after bachelor in Hollywood. Who was his date to the New York premiere of his new movie The Ides of March?

While some expected to see his rumored new companion Stacy Keibler on his arm, Clooney — a man who always prefers to keep us on our toes — instead brought not one, but two dates: his mom and dad.

“I do [have two dates] — my mom and dad,” Clooney told Access Hollywood.

“My mom — I don’t want to say it, but she’s really drunk, so try not to talk to her. She slurs and stuff comes out of her mouth — it’s really bad,” Clooney joked.

In that case, maybe she would give us the scoop on why Clooney and Elisabetta Canalis broke up?

The debonaire actor’s father Nick Clooney is a journalist and the brother of the legendary late singer Rosemary Clooney. Mom Nina Clooney is a former beauty queen and writer.

Clooney and Keibler have been rumored to be an item since shortly after his split from former Dancing with the Stars contestant Elisabetta Canalis amidst whispers she was pressuring him to marry.