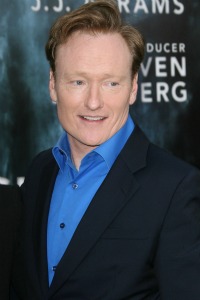 It was a moment many thought we would never see — but of course, funnyman Conan O’Brien is always full of surprises. The Conan host showed up at his old digs last night to collect a little lost property he left behind.

In case you were living under a rock last year and didn’t hear, Conan O’Brien left The Tonight Show under less-than-auspicious circumstances when NBC handed it back to Jay Leno because Leno’s other show was underperforming — an experience O’Brien told Rolling Stone was like being in a “car crash”. After a contractually obligated hiatus from network TV and a sold-out live tour, O’Brien returned to the small screen with his TBS show simply called Conan.

O’Brien absolutely delighted the audience of Late Night with Jimmy Fallon when, after the host’s monologue, he popped out from behind the curtains.

“I was in New York and I decided I wanted to come by, check out my old studio,” he said after receiving a rousing standing ovation from the crowd.

“Anyhoo, I came by for a reason, which is I left something here, something important to me,” O’Brien told Fallon as he reached behind a couch cushion and pulled out his old puppet pal Triumph the Insult Dog.

Triumph often appeared on O’Brien’s first two NBC shows and was part of one of the most shocking moments in MTV VMA history — asking if he could sniff the ample bottom of Jennifer Lopez.

O’Brien only stayed for a minute or so, but he gave Fallon a great compliment before he left: “You’re a good man, Jimmy Fallon,” he said.