Salma Hayek is this month’s Redbook covergirl, and the actress opened up about her career, her upcoming Puss in Boots movie and being married to billionaire Francois-Henri Pinault. 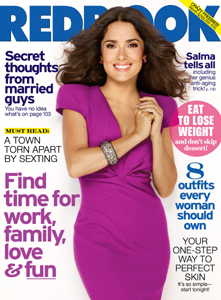 Salma Hayek looks beautiful in a purple dress on the cover of the November Redbook magazine. The busy actress is promoting her new movie, Puss in Boots, while taking care of her 4-year-old daughter, Valentina, with French billionaire Francois-Henri Pinault.

“I work hard, I make my own living and I love it. I like having financial independence,” says Hayek, whose husband Pinault is worth an estimated $11.5 billion. “I don’t ever want to have to depend on anyone completely. But when I have troubles sometimes, its nice to have someone there to help.”

Pinault is the CEO of PPR , which owns Gucci and Yves Saint Laurent, and this definitely brings some perks in the fashion world. “I’m still a Mexican. I like to play fashion with him, but I’m nobody’s Barbie,” insists Hayek.

Hayek, 45, says she is looking forward to her daughter watching her new movie, Puss in Boots. “I liked the idea of doing a movie that Valentina could see, since there are many I’ve done that she is too young to see, and a few I’d probably never want her to. I’m a watchdog when it comes to what she can and cannot see.”

In fact, she says that motherhood has softened her – but she can still play it tough. “I’m playing the queen of a drug cartel in an Oliver Stone film,” says Hayek. “He asked if I’d gone ‘all soft’ because I’m a mother. I said ‘Yes, but I can be the devil if I need to, because after all, I’m an actress.'”

For more photos of Salma, check out Redbook online and pick up the November issue of the magazine on newsstands October 18th.