Demi Moore appeared on Good Morning America today to promote her newest work, Five and surprisingly, she mentioned her husband Ashton Kutcher, after weeks of no comment on the status of their marriage. 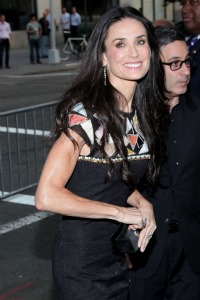 Demi Moore took to the morning show airwaves today to promote her newest work, Five, a series of docudramas directed by some of Hollywood’s most talented women, Moore, Jennifer Aniston, Alicia Keys, Penelope Spheeris and Patty Jenkins. Their vignettes about how each family deals with it when the news of breast cancer hits their families airs on Lifetime on October 10.

During her interview on GMA, Moore opened up about the support she and Kutcher have for each other and their marriage.

She revealed that when Kutcher made his debut on Two and a Half Men, she sent him an orchid.

Moore then stated that when she was busy with her directorial debut on Five, Kutcher sent her flowers and a special note.

She stated, “It’s like one of those small, little gems.”

Moore was indeed wearing her wedding ring as she sat alongside Jennifer Aniston and Alicia Keys as they promoted their new project.

Moore revealed about her directing debut, “My piece really shows how one event can really define the direction of someone’s life. Part of what motivated me was wanting to bridge that divide that says, ‘No, that happenes to other people.’ And in doing so, to share with others the value and importance of getting out of that denial.”

Most of all, Moore feels that this particular project will give people hope who are fighting the fight of their lives.

She stated, “If people walk away with just that, then we will have done a lot.”