Derek Hough and Lauren Conrad are reportedly dating. Where were these two ridiculously good looking reality stars spotted together?

It’s a match made in reality television heaven! Former The Hills star Lauren Conrad is reportedly dating Dancing With the Stars pro Derek Hough, according to US Weekly. 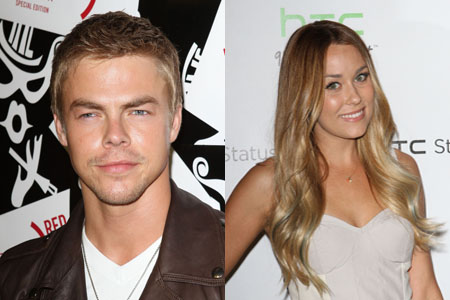 Hough, 26, and Conrad, 25, were spotted together at Los Angeles’ Sayers Club on September 29. “They were very flirty,” a source told US Weekly. “They were dancing and holding hands!”

“They were close to each other,” a source told E! of their night out. “He had his arm around her waist. They were dancing and also holding hands.” They later left together but stood far apart when paparazzi spotted them.

The surprising coupling comes on the heels of recent break-ups for both stars: Conrad broke it off with longtime boyfriend Kyle Howard, 33, in June, while Hough is getting over former gal Cheryl Cole.

“It hasn’t been easy moving on, but Derek has been sweet,” a friend told the magazine. “They are having fun and seeing where it goes.”

Hough’s rep refused to comment about her client’s personal life, while Conrad’s rep was a little more blunt.

“Nothing to comment on,” Conrad’s publicist, Nicole Perez-Krueger, told SheKnows when asked about her client’s maybe relationship with Hough.

Both stars are in high demand these days: Conrad is working hard on her Paper Crown line, books, website and upcoming beauty line, while Hough is currently partnered with Ricki Lake on Dancing With the Stars.

Conrad will have to compete for Hough’s heart, though — his first passion will always be dancing.

“People ask me, ‘What’s your first passion?’ For me, there’s no order to what I love; it all falls under the same roof,” Hough told Dance.com in a recent interview. “I’m not just a dancer or singer or actor, so I tell them ‘performer.’ I just like to entertain people.”

Do you like Lauren Conrad and Derek Hough together?

Read on for more Lauren Conrad