Denzel Washington has created a scholarship fund at Fordham University. 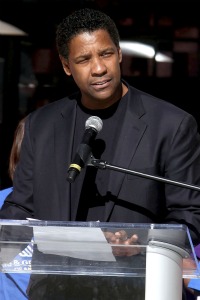 Actor Denzel Washington believes in the power of education — so much so that he just created an unbelievable endowment for Fordham University.

Washington, who earned a Bachelors of Arts in Drama and Journalism from Fordham in 1977, gifted a whopping $2 million to the school to create an endowed theater professorship, with an additional $225,000 in scholarship funds.

“Show me a successful individual, and I’ll show you someone who has had positive influences in his or her life,” the award-winning actor said in a statement.

“I wanted to create the Denzel Washington Endowed Scholarship and Chair in Theatre at Fordham in order to offer the next generation of students positive influences.”

The university hopes to attract successful and well-known actors, playwrights and directors to teach at the school’s theater program.

“Fordham is deeply in Denzel Washington’s debt,” said Roger Milici Jr., vice president for development and university relations at the university. “His international reputation and star power will certainly bring greater interest to Fordham programs and greater support for our mission.”

In addition to his Bachelors degree from Fordham, the school honored Washington with an honorary doctorate in 1991 for having “impressively succeeded in exploring the edge of his multifaceted talent.” He received another honorary doctorate, this one in Humanities, from Morehouse College in 2007, and yet another from the University of Pennsylvania in 2011.

Denzel Washington has received a Tony Award, two Golden Globes and two Oscars. He can be seen in the upcoming movie Flight.