Hank Williams, Jr. and his political opinions are officially no longer a part of Monday Night Football.

Hank Williams, Jr. admits his comments were “dumb” but isn’t about to let anyone believe he’s been fired from Monday Night Football — he quit! 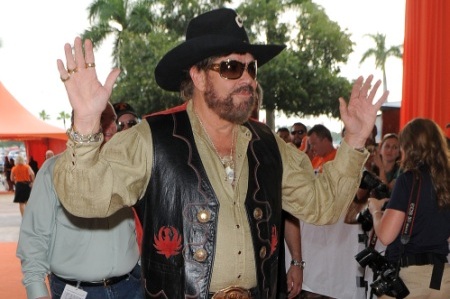 “After reading hundreds of e-mails, I have made MY decision,” Hank Williams, Jr. said in a statement to The Associated Press. “By pulling my opening Oct 3rd, You (ESPN) stepped on the Toes of The First Amendment Freedom of Speech, so therefore Me, My Song, and All My Rowdy Friends are OUT OF HERE. It’s been a great run.”

However ESPN has made an announcement of their own that makes it sound like it was their idea to part ways with the country star. A statement from the sports channel reads, “We have decided to part ways with Hank Williams Jr. We appreciate his contributions over the past years. The success of Monday Night Football has always been about the games and that will continue.”

Either way the 62-year-old and ESPN do agree they’re not working together any longer!

Monday Night Footbal has been in damage control mode ever since the singer of their highly recognizable theme song compared President Obama to Hitler on October 3. Their initial statement about the incident read, “While Hank Williams, Jr. is not an ESPN employee, we recognize that he is closely linked to our company through the open to Monday Night Football. We are extremely disappointed with his comments, and as a result we have decided to pull the open from tonight’s telecast.”

Attempting to clarify what he meant Hank Williams, Jr. wrote on Twitter:

“Some of us have strong opinions and are often misunderstood. My analogy was extreme — but it was to make a point. I was simply trying to explain how stupid it seemed to me – how ludicrous that pairing was. They’re polar opposites and it made no sense. They don’t see eye-to-eye and never will. I have always respected the office of the President.

“Every time the media brings up the tea party it’s painted as racist and extremists — but there’s never a backlash — no outrage to those comparisons… Working class people are hurting — and it doesn’t seem like anybody cares. When both sides are high-fiving it on the ninth hole when everybody else is without a job — it makes a whole lot of us angry. Something has to change. The policies have to change.”

Do you think Hank Williams, Jr. quit — or was fired from Monday Night Football?