Co-founder of Apple Steve Wozniak and Microsoft founder Bill Gates have both expressed emotional reactions to the death of Steve Jobs from pancreatic cancer at the age of 56.

Steve Wozniak started Apple with Steve Jobs in a garage in 1976 – and he tells The Associated Press that “we’ve lost something we won’t get back.” 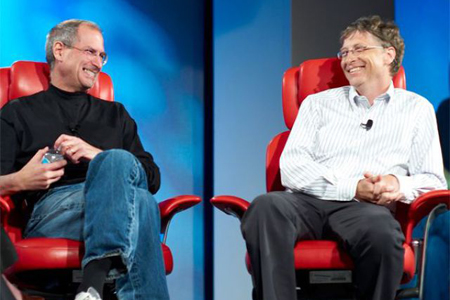 In a heartfelt interview, Wozniak wipes away tears as he remembers his friend Jobs, saying that Jobs “gets a reputation for being a strong leader and for being brash. But to me he was always so kind, such a good friend.”

“The way I see it, though, the way people love products he put so much into creating means he brought a lot of life to the world,” Wozniak says.

He says that Jobs had a gift and that “while everyone else was fumbling around trying to find the formula, he had the better instincts.”

“I think what made Apple products special was very much one person, but he left a legacy,” he said.

Even though Bill Gates founded Jobs’ rival company Microsoft, he still considered the Apple founder a friend. Gates issued the following statement about the death of Steve Jobs:

“I’m truly saddened to learn of Steve Jobs’ death. Melinda and I extend our sincere condolences to his family and friends, and to everyone Steve has touched through his work. Steve and I first met nearly 30 years ago, and have been colleagues, competitors and friends over the course of more than half our lives. The world rarely sees someone who has had the profound impact Steve has had, the effects of which will be felt for many generations to come. For those of us lucky enough to get to work with him, it’s been an insanely great honor. I will miss Steve immensely.”

Watch the video of Steve Wozniak talking about the death of Steve Jobs: