Willow Smith’s new single “Fireball” is funky, fresh – and did we mention it features Nicki Minaj? Listen to “Fireball” here and tell us what you think! 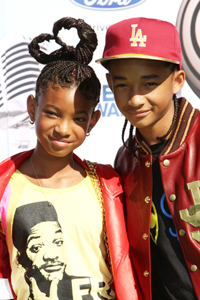 Willow Smith first rose to fame for being the stylish daughter of Will Smith and Jaden Pinkett Smith – and then she dropped her smash hit “Whip My Hair” and she had kids (and adults!) all over the world giving themselves whiplash. Her follow-up single, “21st Century Girl,” didn’t garnish quite the buzz her first single did, however she is hoping to re-capture that momentum with her new song, “Fireball,” featuring Nicki Minaj.

“Can we get the party started?” Willow says at the beginning of the song, before busting out in the infectious chorus, “I’m the fireball!”

“See, I never been the one to toot my own horn/ Beep beep, now watch me put it on/ I set fire everywhere I play/ Make them all go insane, L.A. to U.K.,” Willow sings.

Minaj’s recognizable voice breaks in halfway through the song, rapping: “Put you under my wing, I’m the top boss/ Ain’t from Louisiana, but I’m hot sauce/ Cop the mountain, just to go and build a house off so I ain’t never got to worry what the house cost.”

The hard working 10-year-old, pictured here with brother Jaden Smith, has a record deal with Jay-Z’s Roc Nation and is working on finishing up her album by the end of the year. “I did like eight, nine songs on Willow, so right now, we’re in the process of just trying to close out the album,” producer Ronald Jackson tells MTV. “It’s just the whole process. You got to think about it: She’s a 10-year-old girl. She’s gotta have a life; she’s gotta be a kid.”