It’s not easy being the Last Man Standing. Check out our preview for the pilot of this hilarious new ABC sitcom!

In a world where one man is surrounded by a family of strong women, can masculinity survive? That is the question TV veteran Tim Allen strives to answer in the new ABC sitcom, Last Man Standing. 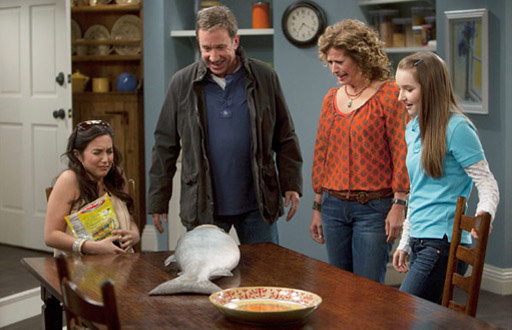 Allen plays Mike Baxter, the marketing director of a sporting goods store who must step up his presence at home when his wife, played by Nancy Travis, gets a major promotion at work.

The only problem? As they say, men are from Mars and women are from Venus — and Mike Baxter is surrounded by Venusians. Can Baxter hack it at home without losing his manhood?

Our take? It’s always enjoyable to watch Tim Allen in the lovable, goofy, manly dad role — it’s what made him famous, after all. As long as Last Man Standing doesn’t fall into too many “war of the sexes” clichés, the show should be an entertaining ride!