There’s more to the school tramp than meets the eye. New indy flick, Dirty Girl, explores the pathos of wanting to be loved in this pitch-perfect, humorous, heartfelt confection from director Abe Sylvia.

Think back to high school. Remember the catty social politics of insecure 17-year-old girls? Now remember that one girl who was secretly revered by the boys and publicly despised by the girls because she “got around”? Dirty Girl is a hilariously harsh yet surprisingly heartfelt coming-of-age story about that girl, in this case Danielle (Juno Temple). 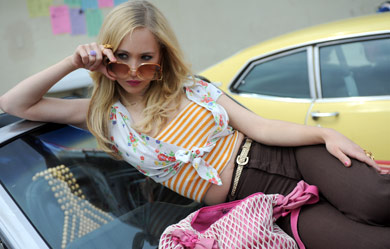 More sexy than pretty, and perfectly comfortable in her push-up bra, Danielle’s only currency is her misguided sexuality. When Danielle attempts to cash out with her principal, she’s ordered to spend her days with the remedial students. (Totally uncool!)  Set in 1987, Dirty Girl captures a less sophisticated teenage-dom without making the film one long MTV-fueled flashback.

Instead, Dirty Girl explores the bruised life of a girl without a father, searching for acceptance and maybe, someday, finding love. Right now, she settles for making friends with Clarke (Jeremy Dozier), a chubby boy coming to terms with being gay in the Midwest. When these two social outcasts are forced to be “parents” to a bag of flour “baby” as part of a parenting exercise, we get the feeling that anything is possible for these two star-crossed non-lovers – good or bad.

Abe Sylvia, an ex-Broadway dancer, wrote/directed this deeply personal, debut film using sarcasm and blunt truths instead of sentimentality. The humor comes from the brassy dialogue and grounded performances by the actors. With perfectly feathered hair (remember all those hours spent with the curling iron? Yikes!) and what, these days, seem like shockingly high-waisted jeans, Milla Jovovich looks like the girl from the Prell Shampoo commercial, circa the first Ronald Reagan administration. 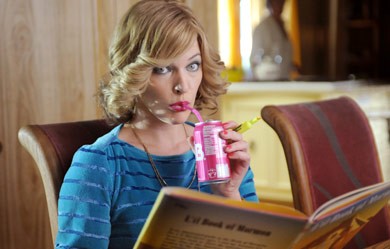 It would be easy to fall into a ditzy, sitcom-like caricature, but instead Jovovich plays Danielle’s mother, Sue-Ann, with the realistic strain of a single mom.

A promiscuous teen herself, Sue-Ann has mended her ways with the help of fiancé Ray (William H. Macy), a Mormon who worries that if Danielle doesn’t also join the church, she’ll be excluded from the family in the afterlife. In what may be the best acting of Jovovich’s career, she pleads with Danielle to accept Ray, saying,” Good men don’t come around that often.” As an audience member, your heart breaks for both mother and daughter. It’s clear Sue-Ann loves Danielle. But for this damaged teen, it’s just not enough. Danielle is going off the rails – Mormon stepdad or not.

Juno Temple, a lively Brit you may remember from 2007’s Atonement, plays Danielle with a chain mail exterior, spewing out lines like, “Contrary to popular belief, I’m not the world’s personal [expletive]-bag” with bite. Only one thing can bring this teenage, dirty-girl-warrior to her knees and that’s her nameless father (played by Tim McGraw). Danielle and Clarke set out on a road trip to California in search of the man who doesn’t even know he has a daughter.

Making an audience root for a back-talking, hard-edged tramp is difficult, but when we learn how tortured Danielle is by not knowing her father, we understand why she acts out with the boys at school. And we forgive her, seeing that all the easy sex she gives away is just a pitiful attempt to connect with a man on any level. As much of a trainwreck as showing up on her unwitting father’s doorstep is going to be, the audience insists that Danielle gets on the train and you’ll also want to hop on for the ride, bumpy as it may be.

Dirty Girl is a movie delving into a young woman’s need to be whole, to be okay and to be loved.

Bottom Line: Dirty Girl will shock you, make you laugh and maybe even make you cry — and you’ll love every minute. No small feat for this indy flick.

Images courtesy of The Weinstein Co.