It may be the same old drama at Seattle Grace this week, but this time, it’s all coming from the male perspective in the special Grey’s Anatomy “all boy episode.”

On tonight’s Grey’s Anatomy: “What Is It about Men?” the docs have to man up when the ER is hit by a comic book convention catastrophe, Mark plays single-daddy to Sofia, Derek gets betweem Bailey’s dueling hotties (guests Daniel Sunjata and Jason George) and Chief Owen throws a punch. All this drama leads the guys to hammer out their frustrations together, while giving female viewers a peek into the minds of men. 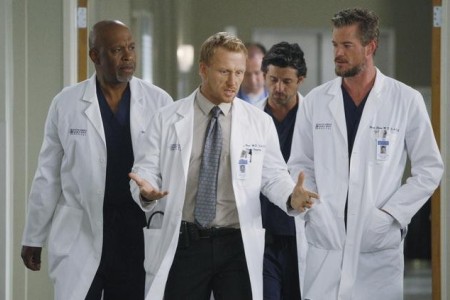 With Dr. Webber (James Pickens, Jr.) still struggling to find his footing now that he’s not chief anymore, a stampede at a comic convention brings in a crush of fan boys and girls. All the wild costumes and characters should make for some wacky moments, along with some serious injuries and medical emergencies.

In other words, Chief Owen (Kevin McKidd) has his hands full. On top of the influx of patients, he’s trying to turn himself into a mobile office. He’s also still got Bailey in his face over his new job and he”s still smarting over Cristina (Sandra Oh) having that abortion. The stress is building and tonight, Owen is going to lose his cool. What will people think after he throws a punch?

Meanwhile, with Callie (Sara Ramirez) and Arizona (Jessica Capshaw) away at a three-day medical conference, Mark (Eric Dane) gets their baby girl all to himself for a few days. He’s not ready to go easier on Avery (Jesse Williams), but he does shows his soft side while bonding with his daughter.

Amid all this, Bailey’s (Chandra Wilson) delicious ex Dr. Ben returns to the ER and her new guy, Nurse Eli, doesn’t hesitate to get in his face after a surgery mishap. 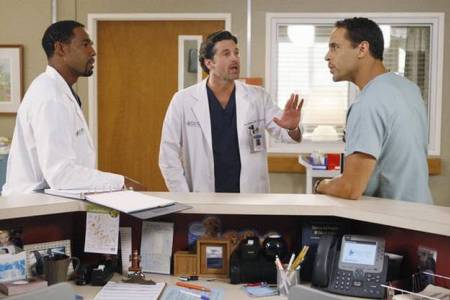 The guys are so fired up Derek (Patrick Dempsey) has to step in, but after he breaks it up, he makes things worse. The good doc assumes the boys are fighting over Bailey and accidently informs Ben that Eli has been putting his magic hands all over her — oops!

It’s about time Bailey got some juicy action, but be warned: If these two don’t play it right, they both might just lose her.

All this girl drama has the guys of Seattle Grace ready to pull their hair out. Instead, they have a bonding session that could include hard hats. After all, the McDreamHouse isn’t going to build itself…

The all-boys episode of Grey’s Anatomy: “What Is It about Men?” airs Thursday, Oct. 6 at 9:00 on ABC, followed by a new episode of Private Practice.

‘What Is It about Men’ Sneak Peek