Jennifer Aniston tells Elle she’s not too worried about having a baby. 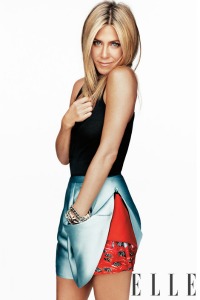 Jennifer Aniston is on the cover of the November issue of Elle, and the Horrible Bosses star talks about a horrible boss she once had herself — and she spills the beans on her maybe baby plans.

Does Aniston want a baby? Yes, but she has a rather enlightened attitude about it — and that attitude is quite different from what the tabloids would have you believe.

“…It’s not what you read. There’s no desperation. If it’s meant to be, it’s meant to be. I’m at peace with whatever the plan is,” Aniston said. “But will you hate me if I say I don’t want to talk about my relationship?”

Aniston, who is one of the creative forces behind the breast cancer awareness film Five along with Demi Moore and Alicia Keys, also described a terrible boss of her own — and revealed her own temper in the process.

“I threw a chair at a director,” she said. “It wasn’t my proudest moment. He was treating a script supervisor horribly… When the director walked in, I threw a chair at him. I missed, of course. I was like, ‘You can’t speak to people like that.’ I can’t tolerate it.”

Wouldn’t you love to know which director that was?

One thing the actress does remain mum on are the comments her ex Brad Pitt made calling their marriage dull and pathetic.

Instead, she has been keeping busy raising the profile of Breast Cancer Awareness Month.

Aniston appears in the annual Elle Women in Hollywood issue, available on newsstands this week.