Anderson Cooper, Tyra Banks and others tweet their thoughts about Steve Jobs’ death at age 56. 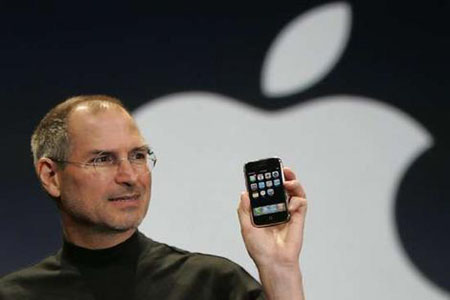 “We are deeply saddened to announce that Steve Jobs passed away today. Steve’s brilliance, passion and energy were the source of countless innovations that enrich and improve all of our lives. The world is immeasurably better because of Steve,” the company wrote in a statement.

“His greatest love was for his wife, Laurene, and his family. Our hearts go out to them and to all who were touched by his extraordinary gifts.”

He officially stepped down from the company in August with a note to Apple’s board of directors. Many in the tech industry worried this meant his health had taken a turn for the worse.

Apple fans around the world are already weighing in with their thoughts, memories and thanks for the tech visionary, including countless celebrities.

Questlove of The Roots

“Thank You Steve Jobs. For everything.”

“Even though I never met him, I’m feeling the loss of Steve Jobs on a very personal level.”

“R.I.P. Steve Jobs. I can honestly say you changed my life and the world many times over.”

“A testament to the impact of Steve Jobs – my first thought, after sadness for his loved ones, is wildly selfish panic about life after him.”

“Steve Jobs said it best: ?’Remembering that I’ll be dead soon is the most important tool I’ve ever encountered to help me make the big choices in life. Because almost everything — all external expectations, all pride, all fear of embarrassment or failure — these things just fall away in the face of death, leaving only what is truly important. Remembering that you are going to die is the best way I know to avoid the trap of thinking you have something to lose. You are already naked. There is no reason not to follow your heart.'”

“RIP Steve Jobs. Such a visionary… He changed the way people communicate and improved lives & relationships in the process.”

“I think a lot of us dream of making the world a better place – Steve Jobs actually did.”

“As I type on my iPhone, tears spring2 [sic] my eyes4an amazingMan I never met. His genius has touched us all. Steve Jobs, you will b/with us 4ever.”

“Rest in peace, Steve Jobs. You were always a big part of my world with your special inventions. Thank you for your brain.”

“Such a sad day, I can trace my apple memories to the IIC when i was a kid. RIP.”

“I just finished my show and I heard the news about Steve Jobs. He was an amazing man with an incredible vision. He changed the world.”

“One of the biggest honors I have had in my life was shaking Steve Job’s hand at a music event.”

“Hard not to think how much Steve Jobs could’ve done with more years. So sad. You’re the best, Steve.”

“We will miss you, Steve Jobs. Sent lovingly from my iPhone.”

“Have the courage to follow ur heart & intuition. They already know what u truly want to become. Everything else is secondary.” – Steve Jobs”

What thoughts do you have about the passing of Apple founder Steve Jobs?

1 hr ago
by Grace Kang