Britain’s most famous bachelor prince, Harry of Wales, will soon be arriving on United States soil, according to word from the British Defense department and U.S. military officials today. 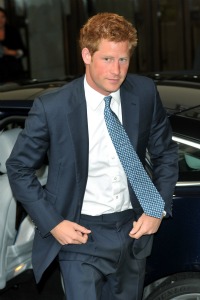 Prince Harry of Wales — or as he is otherwise known, the youngest son of Princess Diana and Prince Charles — will be arriving in the United States to train on Apache helicopter gunships to further his career as a serving army officer for the British military.

According to CNN.com, Harry — or Captain Harry Wales as he is officially known — will be training at the Gila Bend Air Force Auxiliary Field in southern Arizona, and also at the Navy’s airfield in El Centro, California.

This training is part of a two-month series of maneuvers dubbed “Exercise Crimson Eagle”, where British fliers will practice with the Apaches in a terrain that is very similar to the terrain in southern Afghanistan. That is where British troops are currently holding the territory.

Britain’s Defense Ministry said in a statement issued today, “We look to all media outlets to treat Captain Wales as a serviceman and allow him to conduct his training.”

Carla Gleason of Luke Air Force Base near Phoenix, Arizona stated to CNN, “On the issue of deployment on operations, this is a matter for the UK Ministry of Defense to comment on individual movements.”

She also stated that, “Captain Wales will join one of the Apache squadrons and gain wider experience flying.”

According to The New York Daily News, Prince Harry is completing his training in hopes of returning with his squadron to Afghanistan next year. Harry has already served a tour of duty in the Arab nation.

Prince Harry was known for a long time as the playboy son of the late Princess Diana and Prince Charles. While his brother William was the heir, Harry was reduced to the nickname “the spare”. He made several mistakes in judgment as a young man, but has since cleaned up his act and is revered as the voice of humanity and fun in the somewhat stuffy British monarchy.

Harry was last seen publicly as the best man at his brother William’s wedding to Catherine Middleton.