Taking a hit from Sugar Ray

SheKnows: What’s it like to have Sugar Ray Leonard as a boxing coach?

Hugh Jackman: Sugar Ray was pushing me like a madman. He was like, “Hey, my name is on this movie, I’m not gonna have you make me look bad, like some actor.” He was always on me about my left hook. He said, “I pulled it short.” He was onto me about that. 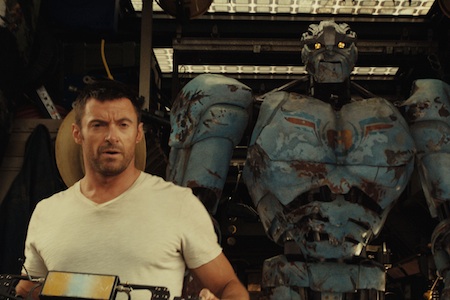 SheKnows: Were you surprised to hear that Sugar Ray was going to train you?

Hugh Jackman: I remember being asked about it. They said, “We’re thinking about hiring Sugar Ray to work with the robots and the choreography and also to help you out with the boxing. Are you cool with that?” I was like, “Can I get this straight? Are you asking me if I’m OK having one of the greatest boxers of all time as my personal trainer? Is that what you’re asking?” Yeah!

SheKnows: Did Sugar Ray intimidate you?

Hugh Jackman: I was a little star struck when I met him. I’ve been lucky enough to meet a lot of big movie stars and famous people, but deep down, if I was any better at it, I would be a sportsman. So, meeting someone like Sugar Ray, I kind of turn into a little kid.

Hugh Jackman: We did a photo shoot, you know those photos that you have of Charlie as a boxer, so, we shot those three months before when I was in Wolverine shape… so, they brought Sugar Ray in about three or four months before we started working on the film. So, he’s showing me and he was sort of into it, but we weren’t really working yet. He’s doing his boxing thing, he has the ability to punch you but sort of just hit you. But every time I was flinching. And then, the behind the scenes camera came out, cause they’re like, this is great footage for the DVD. And the red light went on and I just saw him out of the corner of my eye, and he just started wailing on me. Like, he could not control himself. Camera. Champ of the world. Bang! Bang! And I’m like, “Whoa!” Of course, I’m the actor, too, so I see the red light and I’m like, I’m fine [puts on a brave face], but I think I still have the bruises to this day.

NEXT PAGE: Hugh Jackman: His wife makes him take out the garbage…