With all this singing and dancing, in addition to his hefty Wolverine workouts, Jackman has decided that he also needs to have a singing lesson once a week in order to keep his voice muscles properly tuned. “If Pavarotti had to have a voice lesson once a week, then I need one, too,” he says. Anything you say, Mr. Jackman. 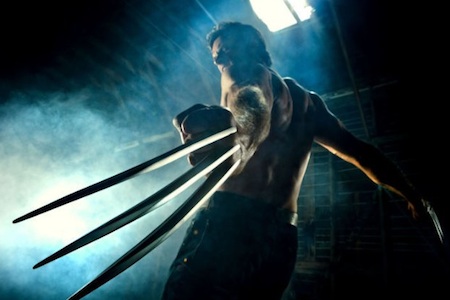 Shirtless: To be or not to be…?

SheKnows: You take your shirt off in this movie… thankfully. But was that in the script? Whose idea was it?

Hugh Jackman: I said to Shawn [the director], “I can’t tell you how much crap I get for taking [my shirt off.]” People say, “Is this in your contract? Do you have to have your shirt off?” and I’m like, ugh.

SheKnows: I understand you tried not to take your shirt off?

Hugh Jackman: So, we went through things, seriously. In the boxing sequence, you see I have a hoodie on. Or, I always have a T-shirt on. And that one scene [where I take my shirt off] was written, I kind of forgot about it, as did Shawn. It was written, I remember in the script, it said, “Charlie drops his bag, he changes because let’s not forget he has one bag of clothing and he lives in a truck. So, he changes wherever he is.” I thought, yeah, that’s good to show that.

NEXT PAGE: Hugh Jackman: On taking a hit from Sugar Ray…