Real Steel star Hugh Jackman sits down with SheKnows to talk about his new robot boxing movie, singing on Broadway and taking off his shirt. Oh yes!

Actor Hugh Jackman‘s friends have been teasing him for some time about going shirtless in almost every film he makes. 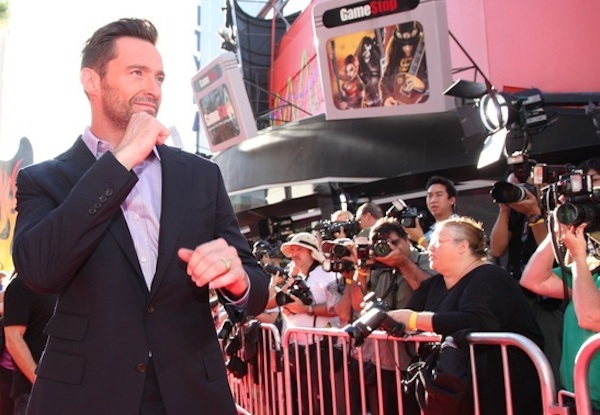 The Australian actor manages to take his shirt off (thank god) in several movies of late, specifically those where he portrays beefed up Wolverine, the mutant superhero from the X-Men series. So, we asked, if strength is part of his character, what’s the problem with taking off your shirt?

He gets too much flak from his friends, he says. At a press conference in Beverly Hills, Jackman explains how embarrassing it is for him. In fact, on the set of his new film, Real Steel, he went to great lengths apparently to shoot scenes where he doesn’t take off his shirt.

Was that in your contract?

“Was that in your contract?” his says his mates ask him. “Did you agree to that…?” Apparently, they like to “ring” him up and give him an earful every time they see a bulging bicep. Why not come around to his house, fellas? I guess Wolverine over the phone is a lot less intimidating than on his front doorstep.

In Jackman’s new film, Real Steel, he plays a reluctant father who is suddenly reunited with his 11-year-old son. Jackman still had to stay in tiptop shape for this film, he says, because his character is an ex-boxing contender.

The modest actor smiles when he talks about getting trained by boxing great Sugar Ray Leonard and that if he wasn’t in show business he would really like to be a professional athlete. Showing his chest so ladies will swoon? It’s not in his character to even think about himself as a sex object. In fact, he says his wife could hardly believe it when he was named Sexiest Man Alive in 2008. “She told me to take out the garbage,” he says. Seems like he has no problem staying grounded.

Not just a pretty bicep

And, personally, the 42-year-old actor seems pretty genuine about not wanting to flaunt his near perfect body. We get the sense he wants his fans to know he’s not only muscle. This is apparent in his film choices, action figures not being the only notches on his belt. He has stared in several dramas and thrillers, including Australia, The Prestige, Deception and even the time warp romantic comedy Kate & Leopold opposite Meg Ryan.

Hugh Jackman wants to be on Glee  >>

Jackman also wowed audiences with his stage talent by singing, dancing and stealing the show when he hosted the Oscars in 2009. His upcoming show on Broadway “Hugh Jackman, Back on Broadway” will most definitely showcase his talents as a stage performer as well. In addition to belting out numbers in the theater, he is also set to play Jean Valjean in the musical version of Les Miserables, the classic tale of one man’s redemption in 19th century France. The film is due out in 2012.