Funny girls are ruling premiere season, with Fox’s New Girl, CBS’s 2 Broke Girls and NBC’s Up All Night and Whitney landing the first pick-ups of fall 2011. Sexy Playboy bunnies and Angels aren’t fairing quite as well, however.

While The Playboy Club earned the dishonor of first cancelation of the fall 2011 TV season and Charlie’s Angels is struggling to hold on, the off-beat, feisty and “real girl” sitcoms are reigning. Zooey Deschanel’s New Girl, Whitney Cumming‘s Whitney and 2 Broke Girls, and Christina Applegate and Maya Rudolph‘s Up All Night are the first new series to land full season pickups. 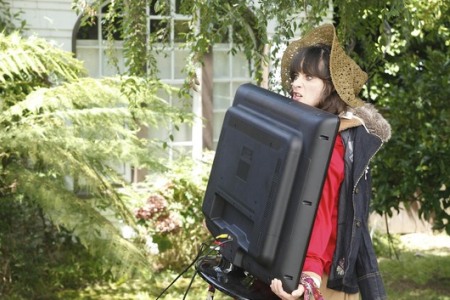 After rocking its premiere week, The New Girl landed the first pickup of the season last week, even after losing castmember Damon Wayans Jr. to Happy Endings. Fox added 11 additional episodes to its original order, which means fans will get a full 24 installments of Jess’s (Deschanel) zany adventures with her new roommates.

Whitney Cummings got the thumbs up next, scoring twice this season. First, NBC announced the pickup of Whitney, the Thursday night comedy she exec produces and stars in. Then today, CBS announced a full order for 2 Broke Girls, which comes from Cummings but stars Kat Dennings and Beth Behrs as one of primetimes new odd couples.

Up All Night also landed a full season pickup from NBC. To be fair, the bitchin’ ladies on Up All Night share the spotlight with a guy, the fab Will Arnett, but the new sitcom about parenting features two “real” women, so we say it still fits the bill.

This is all good news for two girls looking to break into primetime: Chelsea Hander, whose midseason replacement Are You There, Vodka? It’s Me Chelsea got a rehaul but still has no premiere date, and Sarah Silverman, who recently sold her own girly sitcom to NBC.

While primetime’s wacky It Girls are making it happen in the sitcom scenes, several shows threaten to follow Playboy Club into extinction. Charlie’s Angels, Prime Suspect, How to be a Gentleman, Free Agents, Hart of Dixie and H8R will need to shake up their ratings to stay in the game.