The departure of the Black Eyed Peas is the latest in series of misadventures for the Michael Jackson tribute concert. 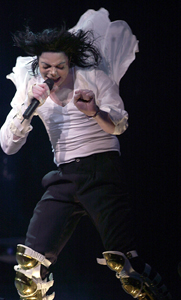 A mere four days before the big event, one of the biggest acts of Michael Forever: The Tribute Concert has suddenly dropped out. The Black Eyed Peas will not be at the Millennium Stadium in Cardiff, Wales in the U.K. on Saturday for the Michael Jackson tribute show.

“It is with regret that we announce the removal of Black Eyed Peas from the Michael Forever bill, but I look forward to a great night with other earth shattering artists,” said Chris Hunt of Global Live Events, the promoters of the concert, on the Michael Forever Facebook page. “The event is really getting into gear and is going to be a fantastic evening for all”.

No reason was given for the BEPs’ departure. A call for comment from the Black Eyed Peas camp was not returned.

“If this was a real tribute they would have made sure they organized this event in true MJ style,” posted a fan on the Facebook page. “But they’ve failed on every single level. I’m fed up of their poor excuses.”

The Black Eyed Peas were announced as performers on Sept. 23.

The concert does not have the full backing of the Jackson family — Jermaine, Randy and Janet Jackson are boycotting the show as it takes place during the trial of Dr. Conrad Murray for the involuntary manslaughter of Michael Jackson. Global Live Events initially booked Kiss to appear in the concert, but rescinded the offer when Michael fans were upset with prior statements by Kiss bassist Gene Simmons regarding Jackson’s previous charges of child molestation.

The Daily Mail of the U.K. is reporting that ticket sales for the concert are weak. Christina Aguilera, Usher, Cee Lo Green, Gladys Knight, Ne-Yo, Alien Ant Farm, Smokey Robinson, Leona Lewis,  La Toya Jackson and more are scheduled to perform and Jamie Foxx is a host. Beyonce will appear via a remote video link.