Tia Mowry showed off her 5-month-old son Cree Taylor for the first time as she made an appearance on The Wendy Williams Show. 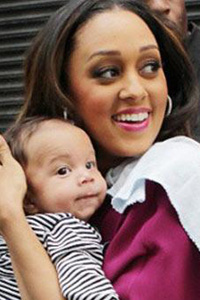 Tia Mowry debuted her 5-month-old son Cree Taylor as she was heading to The Wendy Williams Show. Wearing a striped outfit, Cree looked around and seemed to be enjoying the attention as his mom Tia held him close to her with a burp cloth over her shoulder.

Tia and her twin sister, Tamera, made a joint appearance on the talk show —  and revealed that their reality show Tia & Tamera had been picked up on the Style Network for a second season. In fact, their first season had the highest ratings ever for the Style Network!

Tia also opened up about her birth experience and her disappointment that she was going to have a C-section.

“I was devastated,” Tia told Wendy Williams. “I’m going to have a C-section. Not only that, I have to go back to work six weeks after giving birth!”

It also sounds like Tia wants Cree to have a cousin to play with — pronto! Tamera said that Tia has been pressuring her to have a baby, saying she brings it up “every day!”

“I want to wait — I want to enjoy our marriage! We just got married!”

Tamera married Fox News correspondent Adam Housley in May and the wedding was featured on their reality show which premiered in August.