Life gets a bit Grimm when a Portland homicide detective realizes there’s more to every story. SheKnows has the new Grimm extended trailer and the inside scoop on how NBC’s new cop drama brings fairy tales into the modern age of crime.

Premiere season isn’t over yet and things are going to get Grimm on NBC later this month when a regular detective realizes he’s actually something very special. The modern take on fairy tales comes from the producers behind Buffy the Vampire Slayer and Angel, not to mention Hot in Cleveland execs Todd Milliner and Sean Hayes, and promises to bring something magical to the procedural genre. 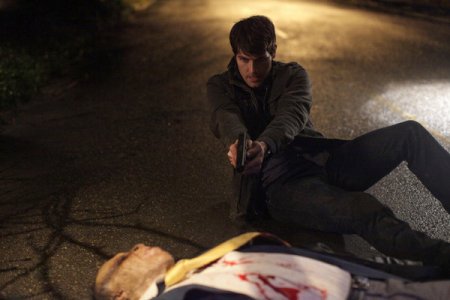 “This show takes a police procedural and turns it on its head, and takes a storybook fairy tale every week and fractures that,” exec producer David Greenwalt (Buffy the Vampire Slayer, Angel) previewed for SheKnows. “Our notion is that the Grimm brothers were actually profilers of criminal events:  The stories they told are real, [the characters] live in our world and our guy can see them.”

Our guy, Detective Nick Burkhardt (David Giuntoli), learns in the pilot that he is the last remaining Grimm, which means that while the rest of us see a sex fiend preying on young girls who wear red sweatshirts, for example, he sees the wolf that’s actually eating them!

As Nick tries to hide his new identity from his partner Hank (Russell Hornsby) and fiance Juliette (Bitsie Tulloch), he finds an ally in an unlikely place — one of the “bad” guys. Bringing a bit of levity to this dark drama, Wolf Monroe (Silas Weir Mitchell, Prison Break) will also prove to be a valuable information source as Nick learns the ropes.

“The character of Monroe — the ‘Big Bad Wolf’ who’s going to church, doing Pilates, eating vegetarian, trying to right his nature — is terrific,” raves Greenwalt. “We didn’t know ’til we wrote that character that, ‘Oh, this is actually amusing.”

Grimm premieres on NBC Friday, Oct. 28 at 9:00, after Chuck. If you still don’t get what it’s all about, SheKnows has the extended preview that should clear up any confusion.

Hot TV News for this week

Doh! The Simpsons to be canceled?