Kim Kardashian and Kris Humphries are busy promoting their E! wedding special this week. So, why are they renewing their vows?

Kim Kardashian and Kris Humphries are already renewing their vows — just two months after their star-studded wedding on August 20! The couple stopped by The Ellen DeGeneres Show Wednesday to promote their E! wedding extravaganza and the comedian had the couple renew their vows for the show. 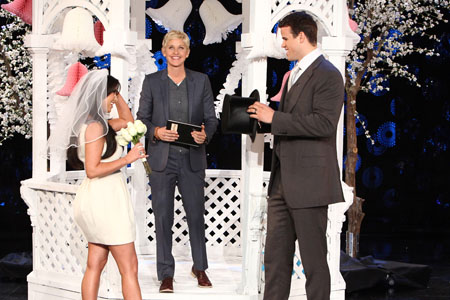 Kardashian revealed something surprising about her wedding: She would elope if she had to do it all over again.

“I would say longer afterparty, but I was so crazy for an entire month…I literally I went crazy. It was so stressful,”she told DeGeneres.

The interview on DeGeneres’ show — along with Tuesday night’s interview on The Tonight Show — gives us our first real glimpse into Humphries’ personality. Before, he was just seen and not heard. Now? We’re finding out that he’s actually pretty funny.

Leno showed off some of the couple’s wedding photos on the show when Kardashian piped in with some thoughts.

“I thought the pictures would look fab if everyone was dressed in black and white,” Kardashian said.

“Especially if you had a black-and-white camera,” Leno responded.

Humphries replied with perfect comedic timing. “That was when you got married, my friend.”

However, he revealed a softer side when it came to actually talking about his new wife.

“I didn’t know her very well, I didn’t know much about her, ” the New Jersey Nets player told Leno. “I thought she wasn’t gonna be as nice as she is and down to earth, and when I got to know her, you know, I fell in love with her.”

Kim Kardashian thinking about a family

The next step for the couple? Babies, of course.

“I think we would wait like a year before we really start trying to have kids,” Kardashian told E! News. “I think we want to figure out where he is gonna play and figure out like his career and like if we have to pack up and move somewhere, like the Midwest. Who knows?”

Will you watch the Kim Kardashian and Kris Humphries wedding special?