An ass-kicking superhero who wants to direct

SheKnows: Your career is taking off. Do you feel like you’ve really made it now?

Evan Rachel Wood: It’s been such a great year. I really feel ready to kind of embrace this as my life choice. I’m really focused on it. I am committed to this whole idea now, so now I’m just having fun. I feel lucky. 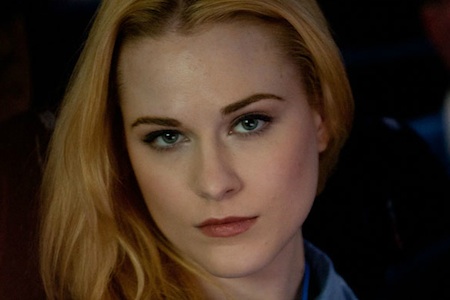 SheKnows: What would you want to do if you weren’t acting?

Evan Rachel Wood: I thought about that. And, I took time off to really get to know myself and figure out if this is what I really wanted to do and not just what I was good at. And, I thought about it, cause this is a weird business – it could be here one day and gone tomorrow. What else would I do? The only thing I could really think of and the only thing I would be really passionate about is psychology. Because, that’s kind of what I do. I analyze and I pick people apart. I get inside people’s heads and through that, I’ve become really interested in it. And, I would still actually really love to go back to school and study it.

SheKnows: We heard there were tons of fans hanging around the set, what was that like?

Evan Rachel Wood: They were there for George and Ryan, basically. I had it easy. I could just walk onto set. But, we always knew when Ryan was there or when he was arriving because you could hear this wave of screams. And we’d be like, “OK, I guess it’s time to shoot, Ryan is here.”

SheKnows: What’s your favorite part of this movie?

Evan Rachel Wood: I love the bar scene [with Ryan]. It’s so subtle and the tension is so good. It’s funny, but it’s sexy and I don’t know… it’s cool to see a really subtle seduction like that.

SheKnows: You’ve done period films, dramas and now an upcoming comedy. Is there something you’d like to do? What about becoming a superhero?

SheKnows: How did you get a black belt in taekwondo?

Evan Rachel Wood: I wasn’t good at ballet. I was a fighter, I guess. I just needed that. I did it for years, until I got my black belt.

SheKnows: What kind of ass-kicker would you want to be?

Evan Rachel Wood: I would want to be a Ripley or Sarah Connor. That I would love to do.

SheKnows: What was it like being a child actor?

Evan Rachel Wood: I did sacrifice a childhood, in certain aspects. I still definitely had fun, but yeah, I have been acting and working since I was five. I think that’s why for a few years, I kind of went, “I’m going to go be as crazy as possible, because I didn’t have an adolescence. I didn’t have a childhood.” And, if I’m going to get really serious about this career, I’m going to have my fun. So, I did some sightseeing and it was crazy and awesome and I got to know myself really well. But now, I’m really ready to commit and to work hard.

Evan Rachel Wood: Yeah. I’d love to do it. And, I just now am using these opportunities to learn because, you know, I’ve worked with some of the best directors out there right now. So, I’m just trying to listen and ask questions. So, that maybe one day I can put it into play.