On life, love and letting loose

SheKnows: Ryan said you have a photographic memory.

Evan Rachel Wood: Oh yeah, he calls me a “hard drive.” He always tried to stump me on movie quotes. And, I would always know exactly what movie it was and I could quote it. 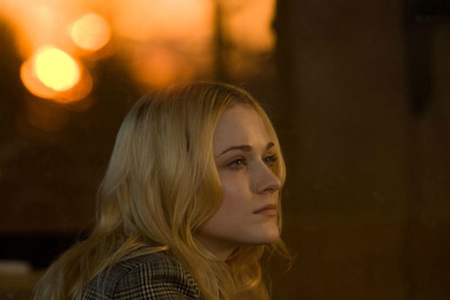 SheKnows: What was it like to work with George Clooney?

Evan Rachel Wood: Everyone on this movie was so awesome, that I feel like it must sound fake when I answer that, because I’m like, “They were great! They were amazing and that person rocked.” But it’s true. George is amazing because he’s an actor. He knows how to work with you. He knows how to talk to you. He makes it really fun.

SheKnows: We heard rumors that George likes to keep a Nerf gun behind the camera. Did he shoot you with it?

Evan Rachel Wood: Yes! And I think… I hijacked that Nerf gun a couple times, actually. And, I was shooting people.

SheKnows: Shooting a Nerf gun doesn’t seem like it would be the kind of thing to happen on a political thriller.

Evan Rachel Wood: I know, but that’s what so fun, and kind of what needed to happen, and what I wish more people would do. When you have to do something so serious, you need something light in between to get out of it.

SheKnows: George is known for his practical jokes. Did he play some on you?

Evan Rachel Wood: He didn’t pull many on me. I think the worst joke he pulled on me is that he had this great reputation of being a prankster, so every day on set I kept thinking, when’s it going to happen…? But with Ryan, George would be giving Ryan direction while very subtly putting a slight mist of water in his crotch, so that Ryan couldn’t feel it and they’d having this big discussion and George would be there just giving Ryan this big wet spot on his pants. Ryan would go do the scene and we’d be like, “Oh my god, he has no idea that’s there.”

NEXT PAGE: Evan Rachel Wood: planting her feet in Hollywood