Typically cast as the illusive sexy girl, she talks about wanting to branch out into comedy, action and even someday play a superhero. She has a black belt in taekwondo, because ballet was never her thing. She also wants, at some point in her career, she says, to direct. Becoming a strong female figure behind the camera is one of many things Evan Rachel Wood would like to achieve.

Despite all the fidgeting, she is poised. She answers the questions graciously, professionally and with a certain amount of charm. All in all, it appears she is on the cusp of a great acting career, and The Ides of March could be the beginning. 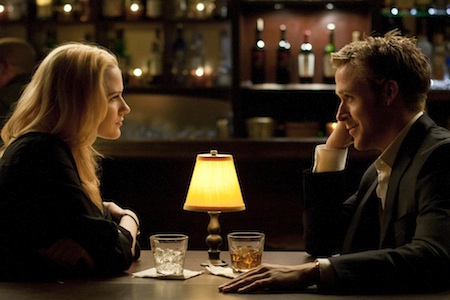 SheKnows: So… you chopped off your hair. Is that for a part you’re playing?

Evan Rachel Wood: It’s for me. I have been wanting to chop all my hair for a long time. I’ve had such long hair for so long. It’s kind of a risk. But once it was gone, it was just like, “Whew! It’s so much easier.” It feels so much more like me. I love it.

SheKnows: What appealed to you about playing this role in Ides of March?

Evan Rachel Wood: I loved how confident the character was. I thought it was cool taking a girl who’s really young but who has grown up in this world, so she’s really used to it and she’s not intimidated by it. She’s throwing all these guys off their game. It’s awesome.

SheKnows: What was it like to work with Ryan Gosling?

Evan Rachel Wood: Oh, god. I guess… hmm, let me see… When you’re going into that and you’re working with somebody like that, who you know is amazing and talented and beautiful, you’re like, OK, whatever. And, then you get around him and you’re like, [expletive], you’re so good! It makes you mad. [laughs] He’s such a great actor, but he’s also this really cool guy. And interesting and creative.

SheKnows: He said he thought you were a genius.

NEXT PAGE: Evan Rachel Wood reacts to Gosling’s comments about her…