Sexy, surprising and full of wit, Evan Rachel Wood goes toe-to-toe with Ryan Gosling in The Ides of March and has everyone in Hollywood stopping to take notice. 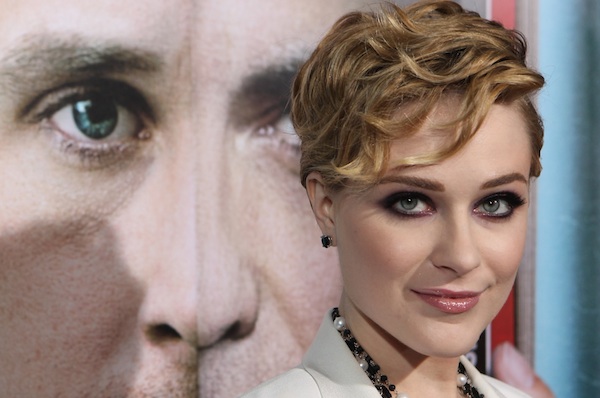 Evan Rachel Wood is anything but predictable. In fact, she prides herself on changing her mind whenever she wants. That’s just part of who she is, and she’s comfortable with it. But hey, isn’t that the mark of a true celebrity, anyway? Not caring too much what other people think when it comes to your personal life.

Movie Review: The Ides of March  >>

Evan Rachel Wood has surely shown us that she’s living in the fast lane and loving every minute of it. At age 20, the actress was engaged to rocker Marilyn Manson, whom she reportedly had an affair with prior to Manson’s divorce from Dita Von Teese in 2007, according to People Magazine.

Manson and Wood had a tumultuous on-again-off-again romance that lasted until the summer of 2010, when the engagement was reported to have ended. This relationship among others was the topic of discussion in an April interview with Esquire where the actress admitted she was bisexual.

She said it was one of the things Manson liked about her. “I was always into very androgynous things,” she said. “Guys, girls… I’m into androgyny in general.”

Her vibe today has a bit of androgyny in it, to tell you the truth. Sporting her new boy cut that seemed to pay homage to an era of flappers, gangsters and women in pants, the actress is smartly dressed in high wasted pants and a ruffled button-down. She’s here to talk about her new role in the George Clooney directed political thriller, The Ides of March, due out October 7.

Wood is the romantic interest to a young, idealistic campaign worker played by Ryan Gosling. She admits being more than lucky to land a role opposite Hollywood’s newest leading man. When asked in a separate interview if Gosling got along well with Wood, he says, “Me and Ev…? Yeah, we got along like a house on fire. She’s really special.”

Wood grins at first when it comes time to talk about Gosling. But soon after admits that it ticked her off a little that Gosling turned out to be as awesome as everyone says he is. “When you’re going into that and working with somebody who you know is amazing and talented and beautiful, you’re like, OK, whatever. And, then you get around him and you’re like, [expletive] it, you’re so good! It makes you mad.”

Ryan Gosling: Gorgeous, sweet… and a bit of a bad boy >>

During the interview she is edgy. Nervous edgy. Biting her fingernails and taking long pauses to gather her thoughts. But when she speaks, she seems earnest and hopeful, just wanting the press to understand she’s doing the best she can, even if she does keep changing her mind. Her demeanor seems hardly strange for a 24-year-old who has been coming of age in front of the camera since she was five. She might be one of Hollywood’s most talked about up-and-coming actresses, but here, she appears to be a young woman trying to find herself.