Tonight on Private Practice: “Breaking the Rules,” hot doc Jake Reilly shows up on Addison’s turf, Cooper goes up against the law and his wife, and Pete proves to be a terribly frustrating patient.

It’s been a TV-land month since we checked back in with Oceanside Wellness last week and as always, tension is high on Private Practice. Addison finds her potential Sam/Jake love triangle getting tighter, anxious Pete doesn’t let his heart attack keep him from returning to work and Cooper breaks the law in tonight’s episode, “Breaking the Rules.” 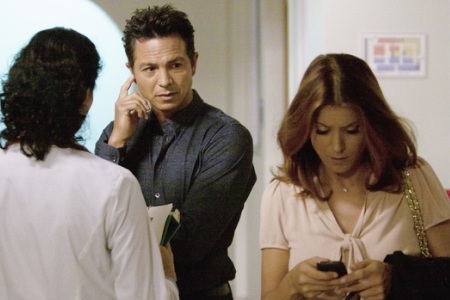 Addison’s (Kate Walsh) baby dreams become all too real to Sam (Taye Diggs) when she drops the bomb that he’ll have to wear condoms from now on, unless he wants to be her baby daddy. He seems more upset about the condoms than the baby-making efforts, but that could change, especially with the ever mysterious Dr. Jake Reilly (Benjamin Bratt) in the house.

Jake was the perfect mystery man last season, only to show up as Addison’s fertility miracle worker last week. When he promised to give her a baby, his calming touch seemed rife with the potential for romance.

This week, however, Addison is horrified when the baby-maker shows up at Oceanside to interview for Naomi’s job. He immediately bonds with Sam and Sheldon (Brian Benben) and easily woos Violet (Amy Brenneman) and Coop (Paul Adelstein). THE fertility guy is knocking on their door and none of Addison’s colleagues can figure out why she doesn’t want to let him in.

Even Jake knows he’s a catch and when Addie jumps to the conclusion that he’s stalking her, he calls her out on being just a tad bit self-important. He’s not that desperate to land a job or a lady… but that doesn’t mean he’s not interested her.

Over at St. Ambrose, Amelia (Caterina Scorsone) tries to convince Charlotte (KaDee Strickland) she’s ready to return to surgery. As if Amelia isn’t frustrating enough, the Chief has to contend with her husband: Coop intends to help his young leukemia patient get the cord blood she needs to survive, no matter what laws he has to break.

Meanwhile, Pete (Tim Daly) is itching to get out of sick leave and takes his frustrations out on anyone within reach, but Violet gets the brunt of it.

Private Practice: “Breaking the Rules” airs Thursday, Oct. 6 at 10:02 on ABC, after a new episode of Grey’s Anatomy.