Kate Middleton is stepping into her first official charitable role. 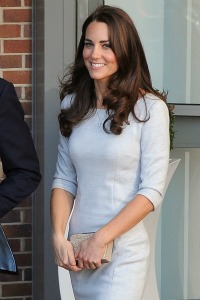 Sounds like those princess lessons are paying off. Kate Middleton has chosen the first organization to which she will apply her royal patronage — and her decision is no surprise.

The Duchess of Cambridge has been officially named as a patroness of the Foundation of Prince William and Prince Harry, an organization set up to enable the Princes to focus their do-good efforts.

“The Duchess of Cambridge, now officially a Patron of the Foundation, shares similar charitable interests to her husband and Prince Harry and will also use her position to help those in need,” said a statement on the Prince of Wales website.

“Now with The Duchess of Cambridge they intend to use the Foundation as the main vehicle for their future charitable activities and that, by raising sustainable sources of funds, it will be able to make charitable grants,” the announcement read.

The name of the Foundation is likely to change to reflect Kate Middleton‘s involvement.

Kate officially became a Patron of the Foundation during a meeting of the Board of Trustees on September 29, but the move was not formally announced until today.

The Duchess of Cambridge sharpened her charity skills last week when she and Prince William opened a children’s cancer center at a hospital where Wills is President — a role held by his late mother, Princess Diana.