Related story When did 'basic' become the ultimate insult? 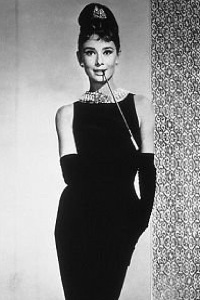 Breakfast at Tiffany’s has been around for half a century. The film was released on October 5, 1961 and today, we’re celebrating its 50th birthday. The film starred Audrey Hepburn as the beautiful protagonist Holly Golightly. The role is arguably Hepburn’s most memorable and its ingrained in pop culture due to its fashion forward styles.

Breakfast at Tiffany’s was adapted from the 1958 novella of the same name written by the infamous Truman Capote. The story centers on Golightly, a New York City resident who spends her time partying and accepting gifts from wealthy men. She’s doesn’t have a real career and refuses to form a genuine relationship with any of her suitors. She leads an eccentric lifestyle, which includes the best in food and clothes (specifically Givenchy).

Golightly’s world is turned upside down when she meets her neighbor Paul, who becomes a steady love interest. Unfortunately, Golightly’s past comes back to haunt her and the truth about her history and identity is revealed to the world.

Breakfast at Tiffany’s is remembered for unofficially introducing the world to “the little black dress” — a staple in every woman’s wardrobe. Fashion played a huge part in bringing the Golightly character to life. According to MSNBC, Golightly’s famous black dress is so popular that the original design was sold in 2006 for $923,187.

Much like Marilyn Monroe in the Seven Year Itch and James Dean in Rebel Without a Cause, Audrey Hepburn’s image in Breakfast at Tiffany’s has continued to dominate pop culture. That dress, those glasses and that crown are just as iconic as the actress herself.