Rapper Tone Loc was sentenced to one day in county jail and three years of probation in the domestic violence case brought against him by the mother of his child. 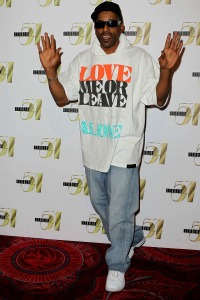 According to CNN, three and a half months after a fight with the mother of his child, Tone Loc entered his plea and avoided extensive jail time.

Loc, whose real name is Anthony Smith, entered a plea of single counts of coporal injury to a spouse, cohabitant or child’s parent and possession of an assault weapon.

The weapon Loc reportedly had in possession was an AR-15 Sporter. It was not used in the alleged assault.

Burbank Superior Court Judge Patrick Hegarty sentenced Loc to one day in county jail and three years of probation. He was also told to undergo 52 weeks of anger management counseling and 30 days of community service.

Back in the late ’80s, Loc was a staple on the Billboard charts with his hits Wild Thing and Funky Cold Medina.

As of late, Loc has been more of a voice actor than a rapper, lending his vocal chords to several characters in children’s cartoon series. He played Fud Wrapper in a cartoon titled Food Rocks, which played at Epcot at Walt Disney World from 1994 to 2004.

Check out Loc’s best tunes ever, below.