Kristin Cavallari may have been booted off Dancing with the Stars last night, but she had one of her biggest fans in the world applaud her talents Monday night, ex-fiance Jay Cutler.

Back in July, after a brief seven months of dating, Kristin Cavallari and Chicago Bears quarterback Jay Cutler announced their engagement. Shortly after, the two broke off their nuptials, after releasing their extensive bridal registry to the world. 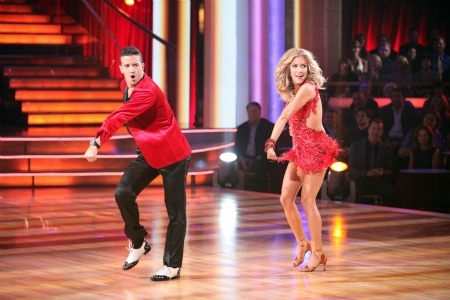 During Monday’s Dancing with the Stars performance show, right after Kristin and Mark’s energetic dance to Beyonce’s Single Ladies, the camera cut away to a beaming Jay Cutler, applauding from the front row. While no mention was made of his being there, it was clear that he was cheering his ex on.

Get the complete DWTS recap from last night’s elimination here>>

Later, when approached by Shaun Robinson from the television show Access Hollywood, Cavallari was mum on Cutler’s ringside seat.

Said Cavallari when questioned about her broken engagement and the fact that Cutler was in the audience, “That’s interesting…interesting, I’m not really sure how that happened. I didn’t see him in the front. Mark obviously invited him.”

To which partner Mark Ballas replied, “He just used his legs and walked right in.”

In a different tactic, Robinson then asked Cavallari’s dance partner Ballas his thoughts. “Nope, not talking about it. I am her dance coach, friend and protector.”

Robinson then asked Cavallari if she could state that she and Cutler were back together, to which Cavallari replied, “No.”

Cavallari, star of Laguna Beach and The Hills, received 24 out of 30 points for her Samba, placing her and Ballas fifth overall. But, it wasn’t good enough to keep them in the running for the mirrorball trophy. Viewer votes were not what they wished for and in a shocking elimination, Cavallari and Ballas were the latest stars to exit the ballroom only three weeks into the competition.