Another couple left the ballroom this week, leaving their chances at the mirrorball trophy behind them. 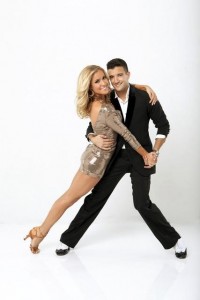 Dancing with the Stars delivered another elimination this week, with the exit of Kristin Cavallari and Mark Ballas. Did anyone else realize Jay Cutler was in the audience last night?

Season 13 of Dancing with the Stars gave a last dance to Kristin Cavallari on Tuesday night. Were you surprised? We were.

The first couple of the night saved was J.R. Martinez and Karina Smirnoff, followed by Ricki Lake and Derek Hough, Chaz Bono and Lacey Schwimmer and Rob Kardashian and Cheryl Burke.

The next batch of lucky contestants saved to dance another day were Nancy Grace and Tristan MacManus, Chynna Phillips and Tony Dovolani and David Arquette and Kym Johnson.

Carson Kressley and Anna Trebunskaya were put in jeopardy first, followed by Hope Solo and Maks Chmerkovskiy and Kristin Cavallari and Mark Ballas.

The first couple sent back to safety was Carson Kressley and Anna Trebunskaya, followed by Hope Solo and Maks Chmerkovskiy.

That left Kristin Cavallari and Mark Ballas as the third couple to leave the ballroom this season.